The recent outcropping of services that analyze the effect of social media sentiment on stock prices is a clear declaration that social media tangibly influences the value of publicly traded companies. It is also a major touchpoint in the ongoing line of inquiry that attempts to ascribe clear ROI metrics and dollar values to social media for business, whether we are speaking about public or private companies.

To date, most analyses of social media for business have sought to establish its value in terms of the other facets of B2B sales and marketing that it facilitates. Social media, for example, can be viewed as a tool for speeding up sales or top-of-the-funnel lead generation, or as an SEO booster. What’s intriguing about the social media stock analysis suites is that they begin to speak about social media directly in terms of monetary value — a relationship that has otherwise been hard to pin down.

What these emerging tools demonstrate is that there is a correlation between the sentiment represented by social media and business value. While they obviously focus on publicly traded companies, there are lessons here to be learned for all businesses, including private ones. The inevitable conclusion is: If your business isn’t engaged in social media at this point, you’re missing a major opportunity to positively affect your bottom line.

Probably the most visible social analytics tool for the stock market is MarketIQ’s Market Sentiment feature, which was developed with The Wall Street Journal’s MarketWatch website. With previews integrated into MarketWatch’s stock detail pages, MarketIQ measures how bearish or bullish sentiment is on Facebook and Twitter, posting “Social Sentiment” scores based on “Sentiment,” “Social Buzz,” and, of course, price per share. 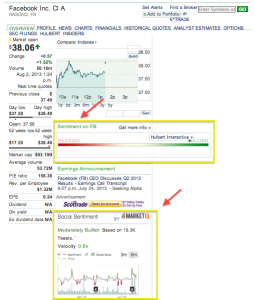 Another, more bold, statement about the impact of social media on stock prices comes from TechSentiment, a website that monitors the social sentiment surrounding some of the most influential technology stocks. Based on a trading API built by the Dutch startup SNTMNT that analyzes stock-related Twitter posts, TechSentiment declares that sentiment has always had a place in determining share prices. Social media is merely the phenomenon that reveals and quantifies this neglected dimension of valuation:

We believe that various emotional factors, or sentiment, have always had a huge impact on share prices. For the first time in human history, social media enables us to instantly capture and analyze these emotions.

While the specifics of how TechSentiment’s process for analyzing the emotions surrounding stocks as they are represented on social media are propriety, Hedgechatter offers a little more specificity in its description of the operations it carries out to deliver concrete trading directions to its subscribers. It purportedly uses “natural language processing and text analytics” to determine what sorts of significant statements are being made about stocks on social media. It also weights statements according to the authority of the speakers. Recommendations are made to Hedgechatter clients based on correlations recorded between qualified communications and fluctuations in stock prices. 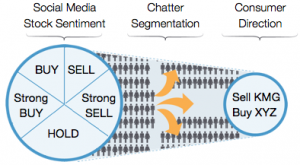 An infographic from Hedgechatter’s website representing the company’s process for evaluating and determining the social media sentiment ascribed to a stock. Courtesy of HedgeChatter.

All of the tools mentioned above are engineered to respond to the thesis that social media affects the value of publicly traded companies. No definitive reports exist that prove this point. But if you ask any layperson if public perception influences stock prices, you would likely receive an affirmative response in most cases. Moreover, if you asked any investor if they would consider using these sorts of services to aid their stock picking decisions, you would probably be met with a willingness to try them. In the competitive world of the stock market, any potential edge is worth considering.

MarketIQ, TechSentiment, SNTMNT, and HedgeChatter, in other words, do not operate on the basis of any particularly radical notions. Rather, they have all been engineered to reflect the commonly held assumption — or at least very strong suspicion — that the central thesis of behavioral economics, is in fact, true. In other words, in our over-communicative age, value is a behavioral phenomenon — at least in part. Social media is especially important for anyone businessperson who ascribes to this line of thinking because it produces massive amounts of data about human interactions. Moreover, it is increasingly doing so for business.

How Social Media for Business Can Affect Business Value

The idea that social media can affect business value is likely one that most business owners don’t want to dwell on. But all signs point to this being our reality. Which leaves businesses with two options: 1) either ignore social media and let others control the social sentiment surrounding your company, thereby affecting the value of your business; or 2) enter the conversation and begin to manage it in such a way that social media adds to the value of your business.

The first step toward taking charge of your social media presence is to establish one. From there, you’ll need to find out who the social media influencers are in the fields relevant to your company, as well as what they are talking about. Then, begin to shape responses to them, developing a company perspective and voice.

Once you have a platform, you will need to communicate on a regular basis and in a deliberate manner, gradually gaining influence in your social media world. If you can get yourself out there and start sharing information that people deem significant, you’ll be able to establish an audience and authority in your respective field. Once you’ve done that, you’ll start having a positive effect on your business value, even if you aren’t part of a publicly traded institution.

The above-mentioned social media tools, of course, are geared toward analyzing the effect of social media on publicly traded companies. But that doesn’t mean the same principles don’t apply to privately held companies. The stock market is the place where companies’ values are most publicly determined and most publicly visible — where company values matter to the most people. But all companies in the twenty-first century have a public presence. And in this day and age, a public presence undeniably needs to be a social presence.

Jake Gerli is VP of Integrated Marketing Strategy at INDUSTRIAL in Nashville, Tenn. He has also worked extensively as a book editor and taught writing at the University of California, Berkeley. He lives in Petaluma, Ca., home of the Lagunitas Brewing Company.