There are a lot of e-commerce platforms available and it can be hard for business owners in the industrial sector to figure out what’s right for them. Many industrials are B2B, whereas most e-commerce platforms are tailored specifically for the needs of B2C retailers and fail to provide support for the needs of B2Bs — things like product-based RFQs, pure catalog configurations with no purchasing options, and undisclosed pricing.

In this article, we’ll look at several different community e-commerce platforms and discuss how they can serve the needs of B2B industrials. 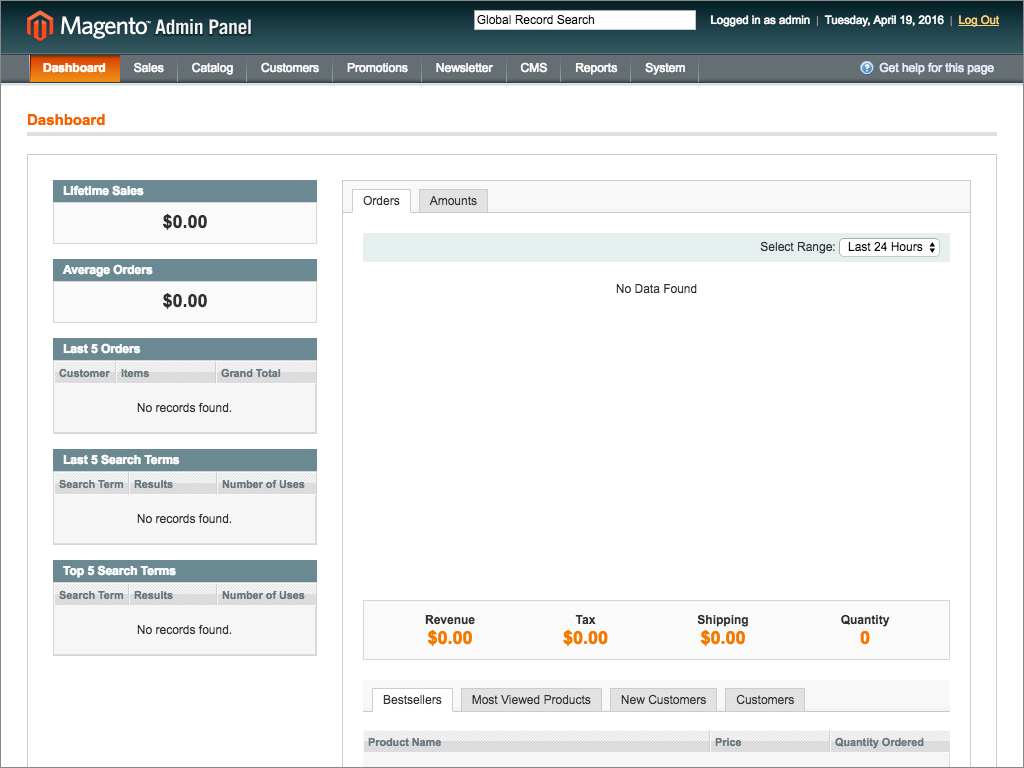 Magento is currently the most popular e-commerce platform (based on Google searches) and the most installed platform among the top one hundred thousand sites (based on BuiltWith statistics). But it is losing ground, particularly to Shopify and WooCommerce (see below).

Magento was designed with the goal of being as extensible as possible. That, combined with its open-source, non-hosted nature, make it limitlessly customizable.

Its high level of customizability, mature codebase, active community, and large extension marketplace make Magento an attractive e-commerce solution for many business owners, particularly those with non-traditional e-commerce needs. When tackling an industrial e-commerce project, Magento is our catalog solution of choice at Industrial Strength Marketing, whether for a simple catalog, an RFQ-based system, or traditional e-commerce. 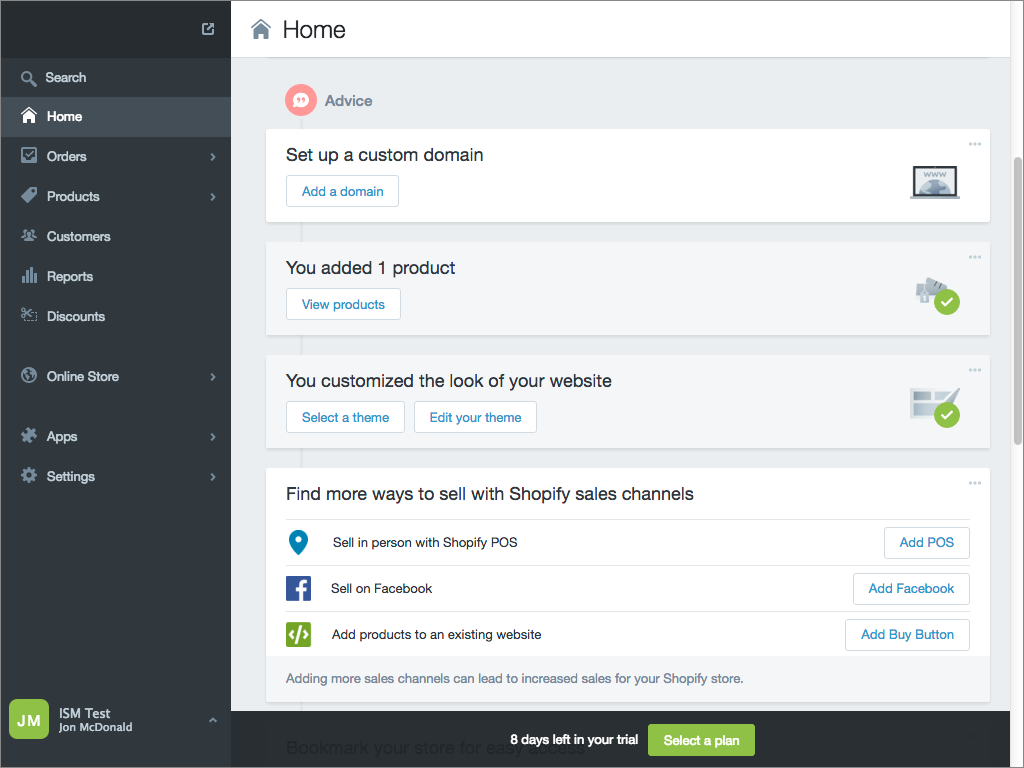 Shopify was first released in 2006, with an API platform and app store following in 2009. It has seen consistent growth since then. In 2015, Amazon closed their Webstore service and replaced it with Shopify.

Shopify is the third most deployed e-commerce solution among the top one hundred thousand sites, according to BuiltWith. Google Trends shows rapidly rising search interest since its release, with Shopify trending to overtake Magento as the most searched-for e-commerce platform.

Their tiers range from $29 to $179 per month with various additional features and lower fees for the higher tiers. They also offer a $9/month tier, but it does not include an online store—only a “buy” button, a POS system, and a Facebook sales channel.

Shopify gives you a large amount of flexibility for a hosted solution, allowing you to implement custom themes and write plugins, but it’s still considerably more limited than an open-source, self-hosted platform such as Magento.

Shopify has very competitive pricing for e-commerce shops of all sizes, but business owners in the industrial sector who only need simple catalog or RFQ functionality may find it ill-suited to their needs, particularly with the barriers to customization that hosted solutions present. 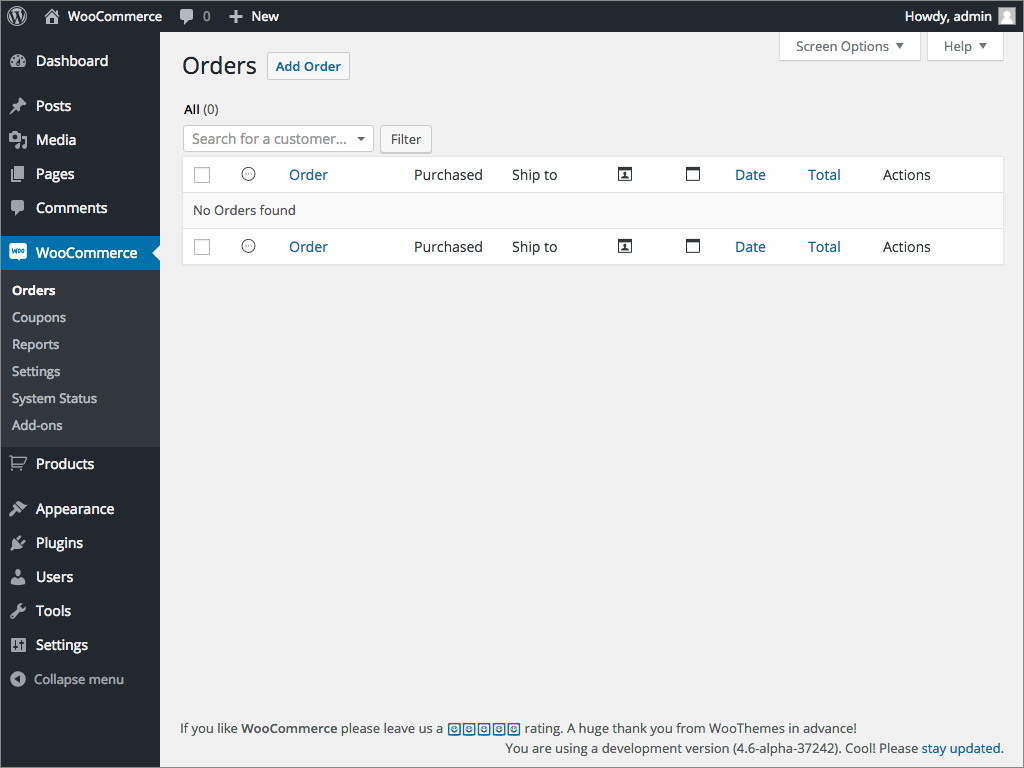 WooCommerce was released in 2011. In 2015 it was acquired by Automattic, one of the core contributors to the WordPress project.

By far the most deployed e-commerce platform across the Internet as a whole, WooCommerce is used for a much smaller percentage of the top one hundred thousand sites than either Magento or Shopify.

The core platform is free, but they sell a variety of first-party extensions for common e-commerce catalog functionality. For example, their Product Add-Ons module ($49) allows for customizable products, WooSubscriptions ($199) adds subscription-based products, and their USPS Shipping Method extension ($79) allows customers to ship via USPS.

WooCommerce plugins are just WordPress extensions, so it’s highly customizable. Additionally, there is a large library of community plugins available from their extensions catalog, providing lots of common functionality: shipping/payment methods, additional product customization, alternative discount models, and so on.

Speaking as someone who’s had to deal with many compromised WordPress sites, I would be very wary of using WooCommerce as an e-commerce solution. Given the importance and sensitivity of the information that needs to be passed around and stored as part of any e-commerce platform, WordPress has not historically provided the level of security that I would feel comfortable with.

That said, if you don’t need payments or checkout, or you’re confident your WordPress site is locked-down and secure, it might be worth considering. However, I would recommend a dedicated e-commerce platform rather than something built on top of blogging software. 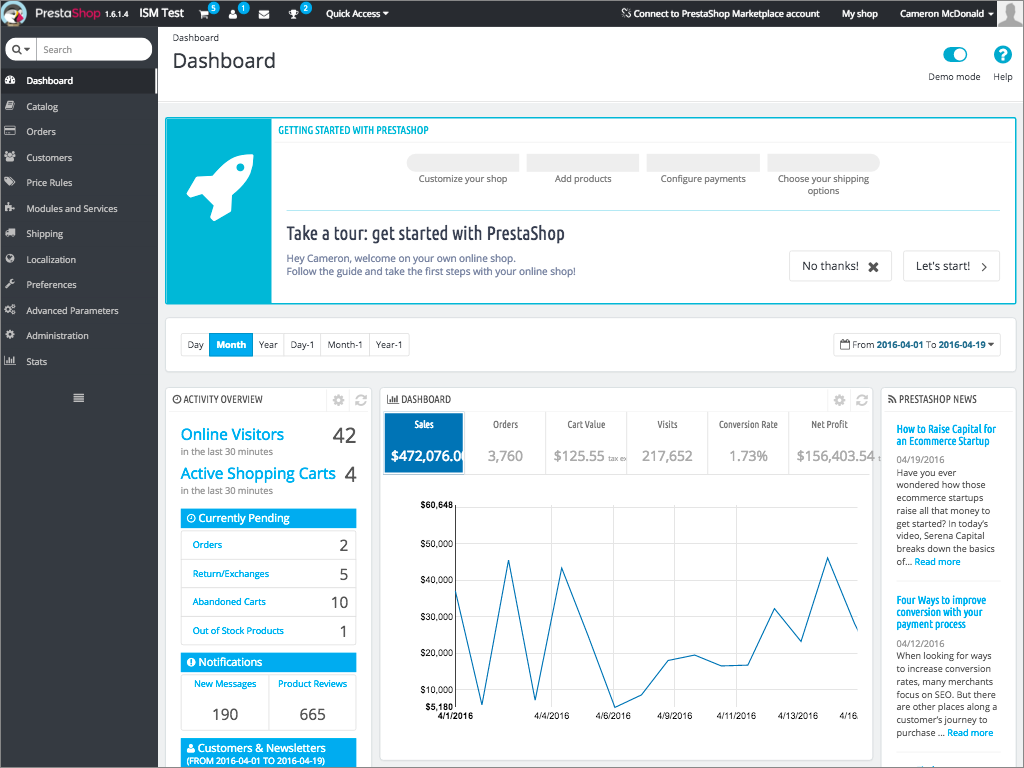 PrestaShop SA was founded in 2007 with the goal of supporting and developing the PrestaShop software, which was originally created as a student project in 2005. PrestaShop Cloud was launched in 2015.

BuiltWith doesn’t track PrestaShop, but it’s consistently been one of the most searched-for e-commerce platforms, only being overtaken by WooCommerce and Shopify very recently.

PrestaShop is free for both the self-hosted and PrestaShop Cloud (hosted) configurations. Like WooCommerce, they offer a variety of paid first-party modules: Online chat for $79.99, PayPal Direct payment method for $179.99, and gift card support for $89.99, to name a few.

Much like Magento, the combination of being an open source platform and having a large library of extensions lend PrestaShop a high level of customizability.

PrestaShop has many of the same advantages that Magento has — open source, non-hosted, extensible, active community, plentiful extensions — but with the disadvantage of not having as large an install base or community, which makes it hard to recommend over Magento. 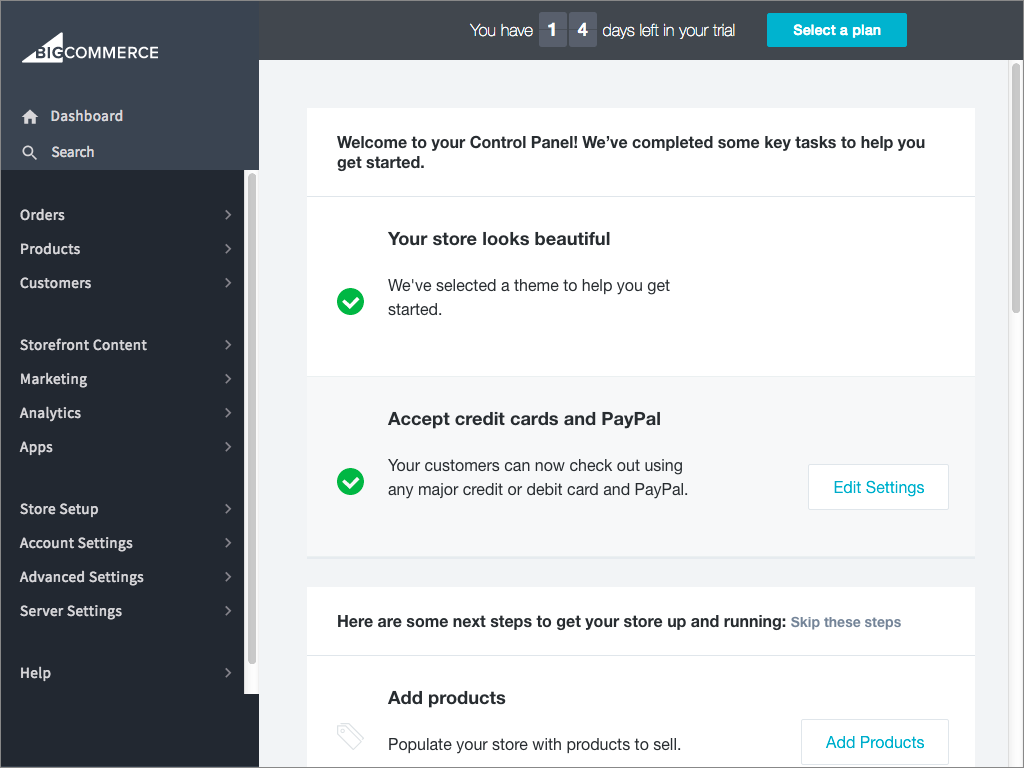 Bigcommerce (sometimes spelled BigCommerce) was launched in 2009 using Interspire Shopping Cart as its core. The enterprise version was released in 2015.

Their standard configurations are, per month, $29.95 for up to $50k in online sales per year and $79.95 for up to $125k per year. They also offer a “Pro” tier that supports up to $1 million in sales per year for a default price of $199.95/month, but special pricing can be negotiated. Enterprise accounts, which allow unlimited sales, are by quote only and are priced by order volume.

As with most hosted solutions, Bigcommerce’s customizability is fairly limited. Store owners have full control of their templates and styles, but extending or modifying functionality requires applying to become a Bigcommerce technology partner, even for customizations that are only for personal use.

As with most hosted solutions, the difficulty of customization can be a real problem for business owners who have non-traditional eCommerce needs. Unfortunately, Bigcommerce presents an even bigger barrier than usual by requiring developers to apply to become technology partners.

Additionally, the open-ended, order-based pricing for high-income shops makes it hard to compare directly with other solutions.

It looks like Bigcommerce is a good fit for small- to mid-sized traditional eCommerce retail shops, but industrials may want to look elsewhere.

Choosing an e-commerce or catalog solution is hard. There are a lot of e-commerce platforms available with a lot of parameters to consider, and it’s a long-term commitment — switching is painful and costly.

With that in mind, in addition to the aspects reviewed in this article, it’s important to consider what provides a high level of stability and reliability, what has a strong community, and what will still be around and supported for many years.

All of the e-commerce platforms reviewed in this article tick most of those boxes (we wouldn’t be considering them if they didn’t), but at ISM we’ve chosen Magento as our e-commerce solution of choice, and we suggest it to anyone considering building an online industrial catalog or store. Its long history as one of the most popular e-commerce platforms, its robust and mature codebase, and its customizability, in particular, makes it a very solid foundation for business owners to build their catalogs on.

We’ve built dozens of Magento solutions for a variety of business owners, particularly B2Bs in the industrial sector, and it has consistently provided us with the flexibility and stability we need to create great industrial websites for our clients.

Prices have been normalized to yearly cost for easier comparison.