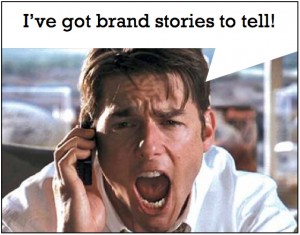 Do you remember the scene in Jerry Maguire when he has his epiphany and wrote his “Mission Statement” for the future of his business and owning his industry’s brand stories? I would hope you do because it pretty much starts the movie and sets the entire story in motion, but just in case you’ve forgotten, here’s the clip:

Pretty moving, but we all know how it ends. Jerry gets fired, brings Bridget Jones with him, argues with Cuba Gooding Jr., falls in love and re-establishes his proficiency in his field using the philosophy he mandated at the beginning. Happy endings all around.

Sure, I doubt many of us are high-level sports agents and therefore may not relate to Jerry’s epiphany and I fully plan on relating this to your business and your brand stories (retail, industrial, B2B, whatever), but first let me tell you another story.

Starbucks and the External Internal Memo

In 2006, Starbucks CEO Howard Schultz spent some months auditing the Starbucks franchises and came to some unsettling conclusions. He felt that the Starbucks experience had become “too commoditized” and was distancing itself from their original vision and purpose. He made his concerns known to his internal leadership team in a memo.

He told them of his feelings by saying things like:

“Over the past ten years, in order to achieve the growth, development, and scale necessary…we have had to make a series of decisions that, in retrospect, have lead to the watering down of the Starbucks experience, and, what some might call the commoditization of our brand.”

“Many of [the] decisions were probably right at the time, and on their own merit would not have created the dilution of the experience; but in this case, the sum is much greater and, unfortunately, much more damaging than the individual pieces.”

He goes on to explain how the choice to move to better espresso machines was a smart economic move, but the height of the new machines cut off the barista from the customer, thereby removing “much of the romance and theatre that was in play” in the stores; and how the need for fresh-roast coffee in every international market required flavor-locked packaging that no longer allowing baristas to scoop and grind the beans, which in turn eliminated the natural aroma expected in the stores, “the most powerful non-verbal signal… in [the] stores.” Schultz then moves to the streamlining of the stores’ design, a necessity based on store ROI, but how the branches inadvertently lost their neighborhood feels and came off as “sterile, cookie cutter, no longer reflecting the passion [the] partners feel about [Starbucks] coffee.”

He ended the memo saying:

“I have provided you with a list of some of the underlying issues that I believe we need to solve, let me say at the outset that we have all been part of these decisions. I take full responsibility myself, but we desperately need to look into the mirror and realize it’s time to get back to the core and make the changes necessary to evoke the heritage, the tradition, and the passion that we all have for the true Starbucks experience.”

It is a very powerful and emotional memo and I’ve used quite a few direct quotes from it already. The interesting thing about this though is that it was an internal memo, never meant to see the light of day or grace any eyes besides those of Mr. Schultz and his top 12 executive team members.

It was leaked and picked up by the fan blog Starbucks Gossip and within days had spread to the likes of the New York Times, the Wall Street Journal, and many more.

This event noted a turning point for Starbucks. No longer could they hide behind their size and distance from the consumer. Thanks to social channels, everyone now knew that Starbucks was aware of their issues, leaving them no choice but to act and actually do something about them.

In an interview following the leak, Schultz said the public reaction was a wake-up call for him.

“Stunned as I was that the memo had leaked, I was also astonished by the depth of conversation it unleashed, as well as the speed…The heated online conversations about the memo were beyond Starbucks’ influence, more so than any other controversy we had experienced…Starbucks had no interactive presence online. No way to speak up quickly on our own behalf, to talk directly to customers, investors, as well as partners, or let them talk directly to us…we were losing control of our own story.”

Unlike Maguire, Schultz never meant for other people to see his thoughts and feelings, but that doesn’t change the fact that he wrote his own Maguire Manifesto, the honest document that broke down walls and changed the course of a brand and an industry.

Jerry Maguire learned the hard way that revolutionary thinking will be met with backlash, and Howard Schultz learned the hard way that nothing in this world is truly confidential anymore. It is the responsibility (not to mention, the necessity) of all brands to take steps towards owning their brand stories. Whether they be the strategically-branded stories created and distributed by companies themselves or the ones curated and fostered by online communities, brand stories and their ownership are vital parts of the business world now.

To get to that point of understanding and owning your own brand stories, you need to write your own Maguire Manifesto. What areas are stagnating in your industry/business/brand/office and what steps are needed to get back to that transparency that truly connects your company with the people it serves? When was the last time you mapped out all the influencers and advocates that stand up for you when you’re not standing up for yourself? Do you know where they live online? Are you creating and curating brand stories that provoke further conversation, and, maybe more importantly, do you know how those conversations fit into your overall marketing strategy and further your business’ goals?

No longer can these Statements of Realization be kept private. Everything eventually gets out. But honestly, why would you want those statements to be kept under lock and key? By releasing them to the very people you’re desiring to connect with, you allow them to hold you accountable to your mission (like the Starbucks community and Howard Schultz) and bring them into your the brand story that you are controlling. No more catch-up playing, no more controversy, just conversation.

This is a big step for a lot of companies and the progression from the walled garden into the town square can be a rough one. It’s important to have the proper guidance and a team that can manage those connections and lead you to where you want to be as an organization that plans on lasting 10, 20, 100 more years. We are entering the days where Connection Planning and Management is going to overtake Channel Planning and Management and your Maguire Manifesto will help lead you into that new dawn.

Recently I was very impressed with Coca-Cola because of their take on the Maguire Manifesto. Not only did they externalize an internal company conversation, but they animated it and actively shared it on Youtube. The fully disclose their marketing and content strategies as well as explain their thinking and why these changes are important to them. It’s like Jerry Maguire times 1,000.

Take a look. Here’s part one of their two-part Maguire Manifesto:

Coca-Cola is leading the way with their efforts in social media and this manifesto just promotes their efforts further, bringing their advocates and fans deeper into the conversation about their conversations (how meta!) and changing fans’ opinions of just how Coca-Cola fits into their lives. It’s an impressive step and one that should be emulated throughout all industries.

Have you already begun writing out your Maguire Manifesto in your head?

Or perhaps there are things standing in your way that seem insurmountable, problems that don’t seem to have a solution or walls that can’t come down.

Jerry Maguire had a box of belongings, a love-struck secretary and a pompous second-rate wide receiver and he still found a way. Howard Schultz had the eyes of a nation focused on the company he loved and the minds of his customers thinking the Starbucks brand was crumbling and he still found a way. Coca-Cola was coming from over 130 years of tradition and a world that viewed them a certain way and they found a way as well.

Their ways started with their Maguire Manifestos, so maybe you should start there too.